Here’s an article I’ve seen in a zillion different papers. The most extensive write-up comes from The Sydney Morning Herald out of Australia:

A cat helped spare a family in the US state of Indiana from death by carbon monoxide poisoning by jumping on the bed and meowing wildly as fumes filled the home, the owners said.

Eric and Cathy Keesling said their 14-year-old cat, Winnie, played a crucial role in saving their lives on March 24 after a petrol-powered water pump in their basement caused the odourless, but deadly, gas to build up.

About 1am, the domestic shorthair began nudging Cathy’s ear and meowing loudly.
“It was a crazy meow, almost like she was screaming,” said Cathy, who hesitated to get up until Winnie’s wailing and jumping persisted.

When she finally climbed from bed, she realised she was nauseous and dizzy and couldn’t awaken her husband. Because he had undergone minor neck surgery the previous day, she decided to call 911, but was so disoriented she had trouble dialling.

Paramedics found the couple’s 14-year-old son, Michael, unconscious on the floor near his bedroom.The Keeslings were taken from the home in oxygen masks, treated for carbon monoxide poisoning and soon recovered. 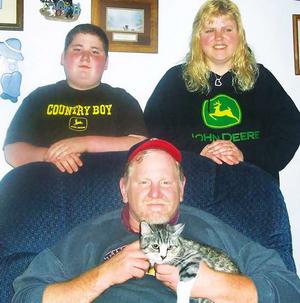 The Keeslings with their hero, Winnie the Cat (photo by Associated Press)

“I really believe cats can sense these kind of things,” she said.

Animal intelligence? Probably more likely a case of a cat that was experiencing some of the same discomfort that the family felt, and was doing it’s best to say, “Hey, doggone it, I don’t feel well.” Still, there’s something to that.

[The Sydney Morning Herald: Cat wakes from nap to save family]

The Mind of the Chimpanzee

There are 2 reader responses to "Cat Saves Family from Gas Poisoning".