An Animal Intelligence reader (I’m sorry, I don’t remember whom) alerted me to a recent article in The New York Times about recent research into the brains of chimpanzees.

Chimps display a remarkable range of behavior and talent. They make and use simple tools, hunt in groups and engage in aggressive, violent acts. They are social creatures that appear to be capable of empathy, altruism, self-awareness, cooperation in problem solving and learning through example and experience. Chimps even outperform humans in some memory tasks.

â€œFifty years ago, we knew next to nothing about chimpanzees,â€ said Andrew Whiten, an evolutionary psychologist at the University of St. Andrews in Scotland. â€œYou could not have predicted the richness and complexity of chimp culture that we know now.â€

Jane Goodall, a young English woman working in Africa in the 1960s, began changing perceptions. At first, experts disputed her reports of chimpsâ€™ using tools and social behavior. The experts especially objected to her references to chimp culture. Just humans, they insisted, had â€œculture.â€

â€œJane suffered early rejection by the establishment,â€ Richard Wrangham, a Harvard anthropologist, said. â€œNow, the people who say chimpanzees donâ€™t have emotions and culture are the ones rejected.â€

The new consensus framed discussions in March at a symposium, â€œThe Mind of the Chimpanzee,â€ at the Lincoln Park Zoo here. More than 300 primatologists and other scientists reviewed accumulating knowledge of chimpsâ€™ cognitive abilities.

The article also elaborates on the work Iowa State primatologist Jill Pruetz. She’s the researcher who recently “described 22 examples of chimps in Senegal making stick spears to hunt smaller primates for their meat”. The article provides some more information about the video I posted last month.

Some of the research on chimps takes them outside their natural habitats and places them in completely foreign situations. How they respond here points at just how intelligent the animals are.

Chimps on their own would not sit at a computer responding with rapid touches on the screen as a test of their immediate memory. Videos of their doing just that at Kyoto University in Japan especially impressed the symposium scientists. 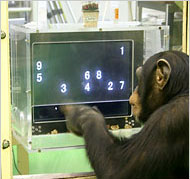 Tetsuro Matsuzawa, a Kyoto primatologist, described a young chimp watching as numbers 1 through 9 flashed on the computer screen at random positions. Then the numbers disappeared in no more than a second. White squares remained where the numbers had been. The chimp casually but swiftly pressed the squares, calling back the numbers in ascending order â€” 1, 2, 3, etc.

The test was repeated several times, with the numbers and squares in different places. The chimp, which had months of training accompanied by promised food rewards, almost never failed to remember where the numbers had been. The video included scenes of a human failing the test, seldom recalling more than one or two numbers, if any.

â€œHumans canâ€™t do it,â€ Dr. Matsuzawa said. â€œChimpanzees are superior to humans in this task.â€

This is the best article on animal intelligence I’ve found in eight months running this blog. I recommend it highly. It’s fascinating. It describes how chimps in Gombe, Tanzania have developed different tools from chimps in Bossou, Guinea. It describes how the chimps exhibit sentience and altruism, traits often cited as being human-specific.