The London Daily Mail has further information about the ‘Cambodian jungle-girl’ I mentioned on Monday. Apparently she doesn’t like civilization and would rather return to her ‘wild’ way of life:

She speaks in grunts, crawls instead of walking —and now she wants to go back to live in the jungle…Filthy and naked when she was discovered, with long matted hair and a furtive, hunted expression, she was caught stealing food left under a tree by a villager.

Yet despite the fact that she is only able to speak three words — father, mother and stomach ache — she has been identified as Ro Cham H’pnhieng, 27. 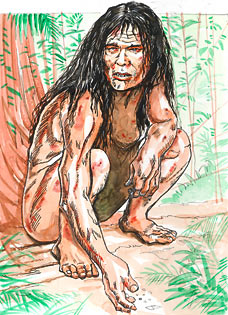 Her father Ksor Lou had not seen her since she was eight, but says he recognised her instantly from a childhood scar. He had thought his daughter had been killed by wild animals after she disappeared herding buffalo in 1989.

But Ro Cham is finding it hard to adjust to life with other humans. “She prefers to crawl rather than walk like a human,” said Mao Sun, a district police chief in the north-eastern province of Rattanakiri, where the girl’s family live. “Unfortunately, she keeps crying and wants to go back to the jungle,” he said. “She is not used to living with humans. We had to clothe her. When she is thirsty or hungry she points at her mouth.”

She was found on Saturday after a villager noticed that food had disappeared from a lunch box he left near his farm, said deputy provincial police chief Chea Bunthoeun. He said: “He decided to stake out the area and then spotted a naked human being, who looked like a jungle person, sneaking in to steal his rice.”

The man and some friends then managed to catch her. Her father, a village policeman, found her after he heard rumours that a naked woman had been caught by loggers. He said: “She was shaking and picking up grains of rice from the ground to eat.” He added: “If she is not sleeping, she just sits and glances left and right, left and right.”

Since they found her, villagers have clothed and fed her. But the woman — uncomfortable in her new surroundings — rebuffs their advances, refusing to use chopsticks and fighting off anyone who approaches. According to her father she took off the clothes she had been dressed in today and acted as if she was going back into the jungle. The villagers believe she is possessed and have asked Buddhist monks to bless her.

Her identity is yet to be confirmed by police.

[London Daily Mail: Let me go back to the jungle, says girl missing for 18 years]