Dave sent in the story of Rochom P’ngieng, a 27-year-old Cambodian woman who has been living wild in the jungle for the past nineteen years. According to the BBC News:

A Cambodian girl who disappeared aged eight has been found after reportedly living wild in the jungle for 19 years. Rochom P’ngieng’s father says he has identified her through scars but she cannot speak any intelligible language. Ms Rochom P’ngieng disappeared tending buffalo in Rattanakiri province, 350km (220 miles) north-east of Phnom Penh.

Local police said she was “half-human and half-animal”. Her father says he will have DNA tests taken to prove she is his daughter.

The woman’s plight came to light when a villager noticed some of his food had been taken and staked out the area. 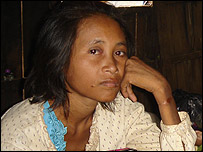 Deputy provincial police chief Chea Bunthoeun told Associated Press news agency: “He spotted a naked human being, who looked like a jungle person, sneaking in to steal his rice.” The villager and some friends then caught the woman.

Sal Lou, a village policeman, said he recognised the woman as his daughter from a scar on her right arm. He said: “When I saw her, she was naked and walking in a bending-forward position like a monkey… She was bare bones. She was shaking and picking up grains of rice from the ground to eat.”

Mr Sal Lou said the family was now watching her closely after she took her clothes off and suggested she would return to the jungle.

There are 2 reader responses to "Wild Cambodian Jungle-Girl".