Lynn sent me an item that’s been making the rounds as an e-mail forward. Though I’m reluctant to post something that I cannot properly credit, I’m going to do so. I like it that much.

Terry Burns from Middleburg, Pennsylvania shared this photograph and caption with an unknown magazine: 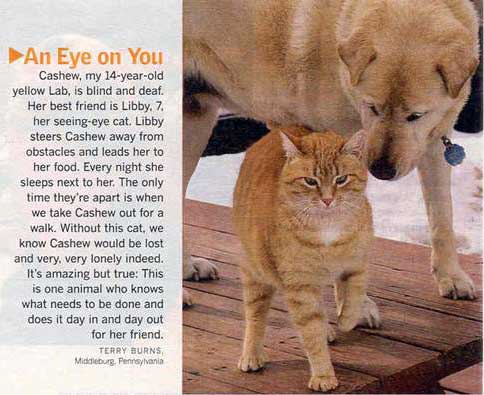 Cashew, my 14-year-old yellow Lab, is blind and deaf. Her best friend is Libby, 7, her seeing-eye cat. Libby steers Cashew away from obstacles and leads her to her food. Every night she sleeps next to her. The only time they’re apart is when we take Cashew out for a walk. Without this cat, we know Cashew would be lost and very, very lonely indeed. It’s amazing but true: This is one animal who knows what needs to be done and does it day in and day out for her friend.

If you know where this originated, please let me know so that I can offer proper credit!

There are 9 reader responses to "Libby, the Seeing-Eye Cat".