Newsweek has an awesome slideshow profiling the Rhesus monkey infestation in northern India. There are ten photographs with brief captions describing the ways in which these creatures interact with the humans around them. Here’s the full text of the introduction by Rajesh Kumar Singh:

The Oct. 20 death of Delhi Deputy Mayor S. Bajwa, who died from a fall he took while trying to scare a troop of rhesus macaques off the balcony of his home, brought to the world’s attention a growing problem in India’s cities: how to make sure the country’s various primate species live in harmony with the dominant one — Homo sapiens.

Recently, Delhi’s rhesus macaques have been getting into all sorts of, well, monkey business, tossing around top-secret documents at the defense ministry, pursuing commuters right on to the cars of the city’s new subway system, even invading hospitals and yanking IVs out of patients’ arms so they can suck up the glucose. 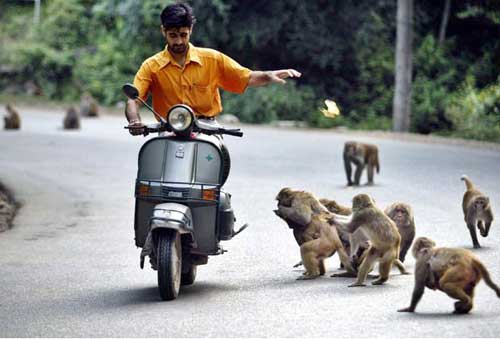 But dealing with the problem is tricky: the simians are sacred to Hindus; the cute but deceptively dangerous critters are representations of the monkey god Haruman.

As India’s metropolises expand, the monkeys’ natural habitat has been squeezed, resulting in even more confrontations between man and monkey. But animal-rights advocates have been critical of efforts to combat the problem — leading some local bigwigs, who live in the primates’ path, to bring in bigger monkeys in hopes of scaring off the smaller fry.

According to this week’s issue of Newsweek, this slideshow was the most-viewed story on newsweek.com last week. I love it.

[Newsweek: Monkeys in the middle]

There are 3 reader responses to "The Rhesus Crisis in India".