My friend Joel loves pigs. That’s probably putting it a little strong. Joel respects pigs and believes they’re too intelligent to eat. He refuses to eat pork products. A life without bacon isn’t something I’m ready to pursue, but I’ll grant that our porcine cousins do have a reputation for braininess.

While browsing the web recently, I stumbled upon the story of Tom and DJ:

The story of Tom and DJ is a story about animal intelligence.Â  It’s a story of animals making up games among themselves and having fun, even between different species.Â  And most importantly, they do it on their own without human direction or prodding. 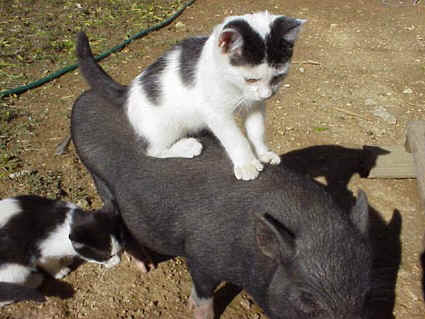 Peggy Couey of Dragonwood Farm, a pig sanctuary, wrote, “Today I was able to catch a shot of my little kitten Tom (aka Tom Mix) and his brother Jerry as Tom saddled up and rode out into the sunset on DJ, one of the little piglets here. Â  This is an every day event here, and they both love it.Â  Once DJ sets off Tom sits down lower and holds on.Â  I didn’t get the award winning picture but I did get one before they were both full grown!”

The Dragonwood Farm link led me to Shepherd’s Green Sanctuary, a non-profit that “exists to provide rescue, lifetime care and other aid and assistance to abandoned, abused, neglected, homeless and otherwise endangered pigs.” A shelter for pigs? I never knew such a thing existed.

There’s a lot of stuff here. As you’d expect, there are pig gifts (which are not gifts for pigs, but gifts of pig-related items such as calendars). But there are also pig stories! “Read them to your children, your parents, your friends. They will make you laugh, they will make you cry and they will make you think twice about these little beings we call pigs.”

There’s a huge list of pigs, many of which have mini-biographies.

This site is like some sort of strange obsession, but I love it.