Golb Guru passed along yet another article about the intelligence of the of the New Caledonian crow. Like the last one, it’s written by Rebecca Morelle of the BBC. This time she reports that scientists have developed away to mount small cameras to the birds in order to learn more about their behavior. 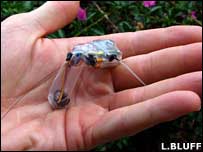 Recent advances in mobile phone technology enabled the researchers to construct a camera that was small enough to attach to a crow’s tail without impairing its movements. They attached the 14g (0.5oz) units — which also contained a radio tag to transmit location coordinates — to the tail feathers of 18 New Caledonian crows.

The footage, broadcasted to the researchers’ custom-built receivers, provided the team with a unique insight into the crows’ behaviour — including some that had never been seen before.

Dr Rutz told the BBC News website: “Before, we thought the crows targeted their tool use at fallen dead trees where they probe for grubs; but now we have observed them using tools on the ground – and that has never been seen before. We also filmed them doing this using a new type of tool, which was very surprising.

“We found them using grass stems – and that is interesting because these stems have very different physical properties from the sticks and leaves that we knew they use. They are using the grass stems on the forest floor, probing the leaf litter, possibly fishing for ants.”

The team is using its video footage to investigate why New Caledonian crows might have evolved their tool-using abilities. This species of crow is the only non-primate animal known to create and use new tools.

The article includes several videos of the crows in action, including examples of tool use. (Unfortunately, I cannot figure out how to link directly to the videos.) You can also read more about this at the National Geographic web site.

Cleverest Crows Use TWO Tools to Solve a Problem