Animals are often credited with possessing an uncanny sixth sense, a level of perception beyond those that we as humans possess. Some people believe that animals are able to sense barometric changes and can be used as an indicator of impending rain. (I never believed this until recently when we were hit with an unexpected heavy storm which was precursored by a sudden silence from the birds. I’m still skeptical, but less so than before.) 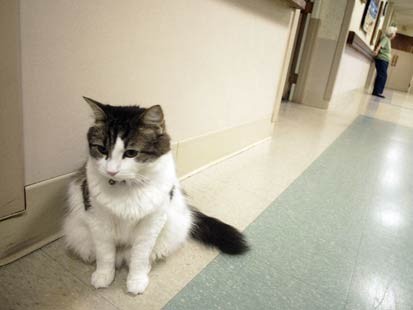 Amy F. sent me the story of Oscar, a cat who lives in a nursing home in Providence, Rhode Island. Oscar apparently is able to tell when a patient is about to die. This story was reported widely in the world media at the end of July. Here’s an exceprt from ABC News:

The 2-year-old feline was adopted as a kitten and grew up in a third-floor dementia unit at the Steere House Nursing and Rehabilitation Center. The facility treats people with Alzheimer’s, Parkinson’s disease and other illnesses.

After about six months, the staff noticed Oscar would make his own rounds, just like the doctors and nurses. He’d sniff and observe patients, then sit beside people who would wind up dying in a few hours. Dosa said Oscar seems to take his work seriously and is generally aloof. “This is not a cat that’s friendly to people,” he said.

Oscar is better at predicting death than the people who work there, said Dr. Joan Teno of Brown University, who treats patients at the nursing home and is an expert on care for the terminally ill. She was convinced of Oscar’s talent when he made his 13th correct call.

Nursing home staffers aren’t concerned with explaining Oscar, so long as he gives families a better chance at saying goodbye to the dying.

This article from WebMD features some conjecture into Oscar’s ability, including thoughts from three animal behavior experts. In the most recent issue of the New England Journal of Medicine, Dr. David Dosa published a short essay descriving A Day in the Life of Oscar the Cat. (This is a great version of the story.)

[ABC News: The Grim Reaper with a Furry Tail]

Video: Christian the Lion Reunited with Humans Who Raised Him