The Washington Post has a fascinating article about a new study of canine behavior.

New research is adding to the growing evidence that man’s best friend thinks a lot more than many humans have believed. 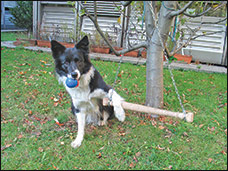 The provocative new experiment indicated that dogs can do something that previously only humans, including infants, have been shown capable of doing: decide how to imitate a behavior based on the specific circumstances in which the action takes place.

The findings come amid a flurry of research that is revealing surprisingly complex abilities among dogs, chimps, birds and many other animals long dismissed as having little intellectual or emotional life.

“Every day, we’re discovering surprises about animals and finding out animals are far more intelligent and far more emotional than we previously thought,” said Marc Bekoff, an animal behaviorist who recently retired from the University of Colorado. “We’re really breaking down the lines between the species.”

In the study, researchers provoked dogs to imitate behavior that provided a treat. Under normal circumstances, dogs manipulate things with their mouths, not their paws. This experiment tested to see if dogs could learn to practice an unusual behavior — pulling a bar with a paw instead of the mouth — through imitation, and under what circumstances the imitative behavior might occur.

The findings stunned many researchers.

“What’s surprising and shocking about this is that we thought this sort of imitation was very sophisticated, something seen only in humans,” said Brian Hare, who studies dogs at the Max Planck Institute for Evolutionary Anthropology in Germany. “Once again, it ends up dogs are smarter than scientists thought.”

The experiment suggests that dogs can put themselves inside the head of another dog — and perhaps people — to make relatively complex decisions.

The article concludes with a debate on whether dogs are self-aware. As a follow-up, The Washington Post featured an online chat with reporter Rob Stein and with Marc Bekoff, author of The Emotional Lives of Animals.

[The Washington Post: What were they thinking? More than we knew.]

There are 2 reader responses to "Dogs Employ Selective Imitation".