Though it’s not about animal intelligence, I promised some friends that I’d share the story of the hermaphroditic six-legged calf born last week in Litchfield, Nebraska. According to the Kearney (Neb.) Hub:

“He’s a real freak,” Brian Slocum of Litchfield said, staring at what stood before him. At about 1 p.m. Sunday, one of his cows gave birth to a black calf that looked fine from a distance. But when Slocum returned a few hours later to check on the calf, now nursing, he discovered something unusual. He saw a six-legged calf.

“I didn’t know what to think,” Slocum said. “I’ve never seen anything like this before.”

The two extra legs come out the back. One is a front leg and the other is a back leg. The extra legs aren’t the calf’s only unusual features. It was born without a rectum and has both male and female reproductive organs. 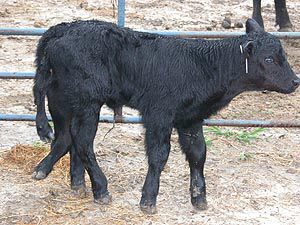 Slocum took the calf to a veterinarian on Monday. The vet surgically created a rectum and gave the calf an overall inspection.

Slocum said the 80- to 85-pound Angus calf seems to be in good health, running, bucking and playing just like other calves the same age. He plans to keep the calf around the farm. “I’m going to see if it will make it. I’m curious to see what happens,” Slocum said.

For more information about this unusual animal, read the entire article by Katherine Thomas and Lori Potter.

[Kearney Hub: Six legs and it’s both male and female]