Sally at Veggie Revolution has posted an interesting piece summarizing an article from Science News. Researchers have observed certain dolphins making use of tools. Sally writes:

Not too long ago, scientists used to believe that “tool use” was one of the characteristics that set humans apart from all other animals.

We now know that animals do use tools. The list of species observed not only using tools, but making tools, continues to grow.

Bird species also make tools to forage. A warbler species on the Galapagos uses thorns to probe under bark, and scrub jays make and use hooks to retrieve edible items — to name a couple of examples. 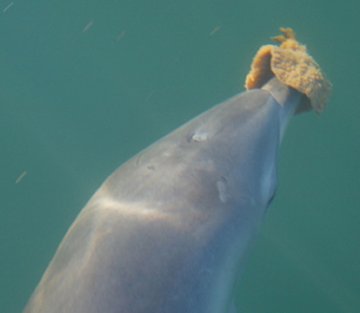 Marine biologists have also documented bottlenose dolphins using tools. Scientists say that dolphins in Australia’s Shark Bay wear marine sponges on their beaks like a glove, to protect their sensitive beaks when foraging along rugged ocean bottoms. Poking around in deep water carries the risk of stings from bottom dwellers.

[Veggie Revolution: Dolphins learn tool use from their moms]