Amanda sent a story of a cat who rides the bus. According to the London Daily Mail, a mystery cat has been hitching a ride for the past few weeks.

The feline, which has a purple collar, gets onto the busy Walsall to Wolverhampton bus at the same stop most mornings — he then jumps off at the next stop 400m down the road, near a fish and chip shop.

The cat was nicknamed Macavity after the mystery cat in T.S Elliot’s poem. He gets on the bus in front of a row of 1950s semi-detached houses and jumps off at a row of shops down the road which include a fish and chip shop.

“The next day I pulled up on Churchill Road to let a couple of passengers on. As soon as I opened the doors the cat ran towards the bus, jumped on and ran under one of the seats, I don’t think any of the passengers noticed.

“Because I had seen it jump off the day before I carried on driving and sure enough when I stopped just down the road he jumped off – I don’t know why he would catch the bus but he seems to like it. I told some of the other drivers on this route and they have seen him too.”

Since January, when the cat first caught the bus he has done it two or three times a week and always gets on and off at the same stops.

Passenger, Paul Brennan, 19, who catches the 331 to work, said: “I first noticed the cat a few weeks ago. At first I thought it had been accompanied by its owner but after the first stop it became quite clear he was on his own.

“He sat at the front of the bus, waited patiently for the next stop and then got off. It was was quite strange at first but now it just seems normal. I suppose he is the perfect passenger really — he sits quietly, minds his own business and then gets off.”

This story’s almost too strange to be believed. The photos only add to my consternation. 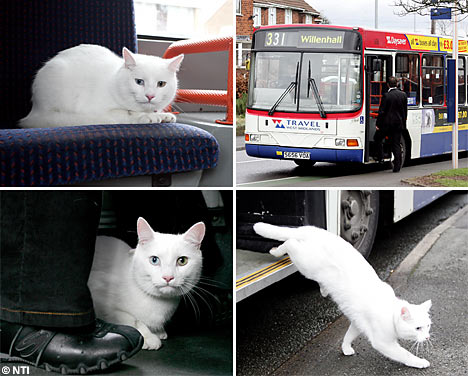 In the first photo, the cat is clearly frightened, but maybe that’s just from the photographer. In the last photo, he’s a little wary, too, but that may just be its normal prowling mode. (In the third photo, he seems to be content.)

There are 4 reader responses to "The Cat Who Rode the Bus".