Those who espouse this sort of belief are often told, “Don’t make the mistake of anthropomorphizing animal behavior.” That is, don’t attribute human motives and reasoning to an animal who does something for which there is a human analog: if a cat seems to hug another cat, don’t assume that it’s expressing affection.

I agree that anthropomorphizing is a dangerous trap. But I think it’s just as wrong, and far more common, to dismiss animal behavior as lacking intelligence simply because it is alien to us.

All of that is prologue, though, to a piece from Damn Interesting. It’s a piece that demonstrates the dangers of anthropomorphizing. It’s the tale of Clever Hans the Math Horse. Clever Hans was a horse owned in the late 1800s by Wilhelm Von Osten, a German high school math teacher. 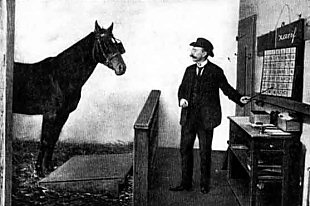 Von Osten firmly believed that humanity had greatly underestimated the reasoning skills and intelligence of animals. To test his hypothesis, he took it upon himself to tutor a cat, a horse, and a bear in the ways of mathematics. The cat was indifferent to his efforts, and the bear seemed outright hostile, but the arab stallion named Hans showed some real promise. With further tutelage, Hans the horse learned to use his hoof to tap out numbers written on a blackboard. Much to Von Osten’s delight, jotting a “3” on the blackboard would prompt a tap-tap-tap from his pupil, a feat which Hans could repeat for any number under ten.

In reality, Hans was merely picking up on his owner’s body language. He may have been an intelligent animal, capable of reading and reacting to unconscious human reaction, but he wasn’t actually performing arithmetic. This is a well-written and entertaining piece, well-worth the read. The comments are a mixed bag. Some are histrionic Conservative screeds, which seems out of place given the subject matter. (What does Michael Moore have to do with Clever Hans?)

Then for horse lovers there is nothing better than homewares that have horse designs so have a look into those if you love horses as they are just fabulous. They need to be given the right care and attention, that’s why horse tack stores are there. See also this wikipedia entry.

Chimps May Have Used Hammers 4300 Years Ago

There are 1 reader responses to "Clever Hans the Math Horse".