Here’s an interesting story from from the Pittsburgh Post-Gazette (originally from the LA Times).

Escobar lived large here in his lush fiefdom 100 miles east of Medellín, far from the teeming slums where he began his life of crime. He built a bullring, an airstrip, an ersatz Jurassic Park with half a dozen immense concrete dinosaurs. He stocked a private wild animal park with hundreds of elephants, camels, giraffes, ostriches, zebras and other animals. He installed four hippos in one of the estate’s 12 man-made lakes.

Today, Hacienda Napoles is in ruins, taken over by jungle foliage and bats. The sprawling Spanish-style mansion has been gutted, scavenged by treasure hunters looking for stashes of gold and cash buried under the floors. Escobar is long gone, cut down in a hail of police gunfire.

But the hippos are still here. 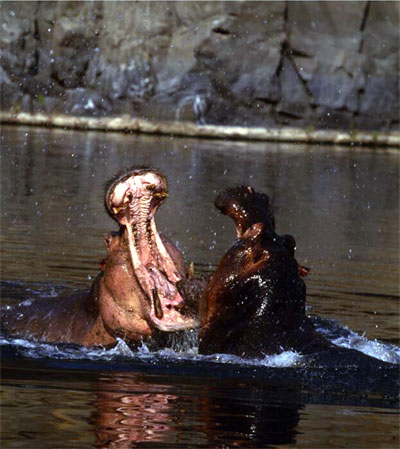 More than 15 years after the government took control of Hacienda Napoles, the elephants, giraffes and zebras have long since disappeared, given away to Colombian zoos or left to die.

But the hippos were never claimed because they were too large and ornery to move. Now the original four have multiplied to 16 and, far from starving to death, as some expected, they have learned to forage like cows. Local authorities say they represent a safety hazard — and are standing in the way of plans to redevelop the late drug lord’s estate.

At night, several of them emerge from their watery habitats and roam for miles looking for grass to munch on. Three months ago, a male hippo was shot to death by ranchers after he wandered three miles from the rest of the herd to a neighboring stream.

Weighing as much as three tons, the hippos are not constrained by ordinary barbed-wire fences or gates. “The problem is, you cannot manage them,” said Francisco Sanchez, environmental officer of Puerto Triunfo municipality that has control of the mansion and the former zoo area of the property.

“They are too big and wild,” said Sanchez, who said Escobar bought the original four from a dealer in New Orleans for $3,000 each.

Among themselves, hippopotamuses, whose name means “river horse,” are gregarious animals, living in herds of up to 40 in their natural habitat: the rivers, lakes and swamps of a dozen African countries. They live up to 50 years, and the males grow to a hefty size, sometimes 12 feet long and five feet high.

I love this story. Nature reclaims its own, whether it’s the jungle or, well, the hippos!