Animal Intelligence reader Nicole forwarded a story about birds who have learned to “rap”. That is, certain birds living in cities have learned to modify their song to increase their chances of finding a mate. Here’s the full text of the article:

Birds living in cities are performing a type of “avian rap” while their rural counterparts are sticking to more traditional sounds, a study shows. Dutch researchers found that urban species of birds sing short, fast songs rather than the slower melodies of countryside birds. City birds also sing at a higher pitch and will try out different song types. Experts said city birds have adapted to counter background noise and increase their chances of finding a mate. 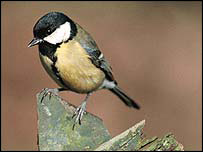 The research focused on great tits in ten major European cities, including London, Paris, Amsterdam and Prague, and compared them to forest-dwellers. In every comparison city birds sang a more varied array of songs, which were short and had higher minimum frequencies. Urban tits consistently experimented with between one and five note calls, while those in forests close to the cities stuck to more normal combinations of two, three and four note tunes, the research found. The study even gives the example of one Rotterdam great tit attempting a 16-note song, possibly copied from a blue tit.

The study, by a team of researchers from the University of Leiden in the Netherlands, is the first to establish a Europe-wide pattern of diverging birdsong. Study leaders said birds had developed shorter, more varied, higher pitched sounds to make themselves heard above trains, aircraft and road traffic. Male birds use their song to mark their territory. If their song is not heard they may come face to face with rivals and end up having to fight them off, the experts said.

They also use song to attract mates and have had to adapt to make sure they are heard by females. The research paper, published in the journal Current Biology, said: “Our data show that the adjustment of individual great tits to local noise conditions is not a local phenomenon but occurs throughout Europe and probably in all noisy urban areas.”

It went on: “Urban birds often experience very noisy conditions while singing, which may influence the efficacy of their acoustic signals. Male birds typically sing to defend a territory and to attract mates. If their song is not heard by the targeted audience they have to physically fight off intruders, and attracting females may be difficult.”