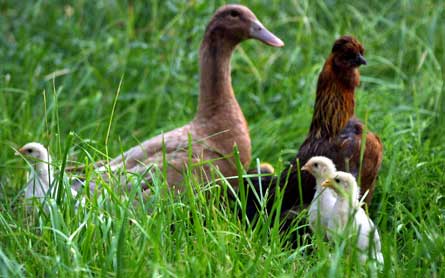 A duck and a hen on a farm outside SÃ¶derkÃ¶ping have found each other. The duck is now a foster-father to five chickens.

Annika StenbÃ¤ck and Peter Andersson, who live at the farm, tell the daily NorrkÃ¶pings Tidningar about the love birds.

“So we fetched some fertilized eggs from our old hens at my parents-in-law. She got six chickens, but one has died,” says Annika StenbÃ¤ck.

“And since the chickens were hatched he hasn’t left her side,” says Annika StenbÃ¤ck to NorrkÃ¶pings Tidningar.

My cat Nemo has a favorite rag. It’s like a security blanket. He keeps the thing outside, but he carries it around with him. He plays with it. He sleeps with it. He keeps it in safe spots.

Oliver, a neighbor cat, is a glove thief. If I leave my garden gloves outside, chances are I’ll be missing one (or both) before long. I’ve seen him carrying them across the yard. Where does he take them? Why does he take them? Does he think he’s playing a joke on us?

Here’s a photo I stole from MSNBC: 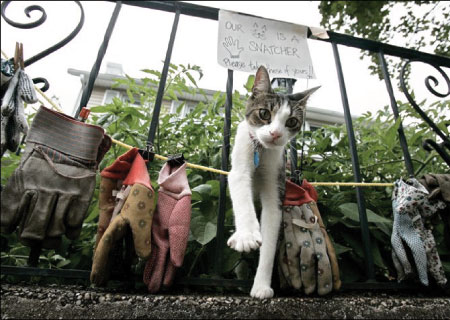 photo by Julie Jacobsern for AP

Willy the cat poses with several garden gloves that he had taken from unknown yards in Pelahm, N.Y., on Thursday July 20. Willy, who is one year old, has brought home nine pairs of gloves and five singles over several weeks, dropping them on his owners’ front or back porch.

Why do animals collect things?

From the London Telegraph:

Chris Hinds, a court warrants officer, was out walking his own dogs when he saw the alsatian-cross injured and whimpering at the water’s edge. As he approached, it panicked and plunged into the River Tees only to be swept away by the fast-flowing tide on Tuesday evening. Mr Hinds, 43, sent his son Raymond, 18, to call the fire brigade and RSPCA from his mobile phone in his car parked nearby.

He stayed on the bank beneath Newport Bridge, Middlesbrough, to follow the path of the dog. As the dog yelped 30ft out and he shouted, a seal popped up and began to circle the stricken animal. Then to Mr Hind’s amazement it swam up behind the dog and used its nose to push it by the backside on to mudflats.