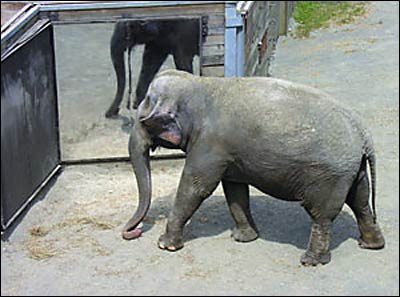 It’s been a while, eh? No worries — I have no plans to abandon this site.

Here’s a video from Japanese television in which a chimp (?) plays Ms. Pac-Man.

I wish I could understand what the narrator is saying. I think it would add a great deal of meaning. It’s clear that the researchers are teaching the animal, and that the animal is learning, and even that it has some conception of what is happening. But I wonder to what degree the hand movements are merely reflex. I’d love to see a longer uncut video, and to be able to hear more about the actual results fo the research.

In a previous entry I wrote:

As much as I believe animals possess profound intelligence, I donâ€™t quite extend this to fish. By all reports, fish are pretty dumb.

There is plenty of evidence that many fish are fairly intelligent. Here’s a whole set of links discussing the matter.

This set of links resides at a site called Fish School, which offers “techniques that make training pet fish not only possible, but also quick and fun too!”

According to Dr. Calum Brown of Edinburgh University, “Fish are cunning, manipulative, cultured, socially intelligent creatures who do not deserve their reputation as being dim-witted.”

In an NPR radio interview on fish intelligence, Dr. Jens Krause from the University of Leeds says that fish can learn from each other and can even use tools. In fact, recent research has shown that in some ways fish are as smart as dogs.

The list of fish links is impressive — a fine way to kill a lunch hour.

In May 2001, the Medford (OR) Mail Tribune reported on an unlikely friendship between a fish and a dog.

Here’s lookin’ at you, fish
by JONEL ALECCIA

This is the story of a fish named Falstaff and Chino, the dog who loved him. The two met three years ago, when Chino’s owners, Dan and Mary Heath, traded Portland for Medford and a house with a backyard pond.

Falstaff, a 15-inch orange-and-black koi, lived in the pond. Chino, a 9-year-old golden retriever, did not. But every day, Chino would pad out to the pond and peer into the water, waiting for Falstaff to appear. Falstaff would swim to the surface, offering what seemed like a finny greeting. Together, the inter-species pals forged a strong bond.

“Chino just got real fascinated. He would lie there on the rocks and just watch the fish,” says Mary Heath, 58, a retired environmental quality worker. “This is one of the few things that’ll get him to wag his tail.”

The fascination continued when the Heaths moved to a new house and built a new pond. The fancy 2,200-gallon digs made a perfect home for Falstaff — and a perfect perch for Chino.

Today, the dog spends up to half an hour at a time following the movements of Falstaff and a small school of goldfish. Belly flat, paws wet, nose an inch from the water, Chino watches intently as the fish swim close enough to touch. 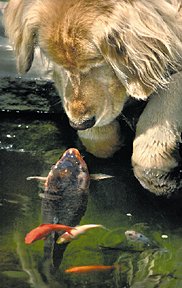 “Falstaff comes up sometimes and will nibble on Chino’s paws,” Mary Heath says.

In cynical moments, she figures the fish is motivated by the food pellets that usually accompany Chino’s visits. At other times, she’s convinced the koi shares Chino’s sentiments. But neither she nor her husband, a Realtor, is quite sure what attracts Chino, who has shown an affinity for other fish, including those in the large tank at his veterinarian’s office.

As much as I believe animals possess profound intelligence, I don’t quite extend this to fish. By all reports, fish are pretty dumb. Still, it seems to me there’s probably some glimmer of an emotional response from Falstaff here. But that could simply be wishful thinking on my part.

An Animal Intelligence reader sent this amazing story of interspecies friendship. Meet Cassie the kitten and Moses the crow:

This clip is from 1999. I wonder if there’s more information available about the pair. I haven’t been able to find any, though I did find this year-old thread at Monkeyfilter.

Here’s an old article about a feral human from TV New Zealand.

“Chicken boy” learning to be human

A 32-year-old Fijian known as the “chicken boy” is getting help to learn how to live like a human being.

Sunjit Kumar was tied to a bed in a rest home for 20 years after being found in the middle of the road pecking like a chicken.

Kumar’s grandfather had locked him up in a chicken coop after his parents died.

Kumar is now undoing all the behaviour he learnt as a child with help from behavioural expert Elizabeth Clayton.

Clayton is the widow of New Zealander mountaineer Roger Buick who died on Mount Everest six years ago.

She told the Holmes programme that at first Kumar was very violent. “He would bite me and pull me and scratch me, but now he’s showing me a lot of love, so he’s coming along well in his emotional development.”

It is thought Kumar was intitially confined to a room by his father. Later his father was murdered and his mother committed suicide.

He was aged between six and nine years old when his grandfather put him in a chicken pen.

Around 20 years ago Kumar escaped and was taken to a Suva old people’s home by welfare officers.

When he went to the home he exhibited the behaviour imprinted while he was in the chicken pen. This included pecking at food, hopping around, holding his hands in a chicken-like fashion and making the noise like the calling of a chicken.

For years he had to be tied to the bed, but after working with Elizabeth Clayton for 12 months he is improving. He shows no sign of mental illness, is being toilet trained and is no longer pecking at his food. Communication is slowly developing too.

Kumar still lives in the rest home and is a long way from living a normal life.

Feral children grow into feral adults if they’re never treated as humans. Find out more about this story at the wikipedia.

Someone at AskMetafilter wonders:

The question produced a list of great books, including:

That is quite a library. Some of these recommendations are of more interest to me than others. I’m fascinated by books that explore the intelligence and the emotional state of animals, but less so by novels about life with animals.

Here’s some footage of clever crows in a Japanese city.

In the end, the impala did not survive, but the hippo did its best.